Pauls (many) jobs on the go.

Pauls (many) jobs on the go.

I have a few jobs happening, and a few more in the pipeline.

Number one at the moment is converting a 1955 Bedford truck into an F100 type of ute. This is for a friend who wants an unusual and individual ute he can call his own. Have shortened chassis 4 feet, am fitting a series 1 Jaguar front end assembly, an FG Falcon turbo ute LSD diff, LS3 Chev V8 and 6 speed auto, along with lengthening the cab 6 inches, (he's a tall fella).!! That'll keep me busy for a while.

No two is my ride-on mower. It developed a fuel leak from the tank which is plastic. The fuel tank is the first thing fitted to the chassis, which means everything above it must come off to access it, the complete deck needs to be removed. The tank is over $100, and me being a cheapskate meant I attempted to fix it myself. It has 3 cracks in it, the major one at the front about 4 inches high, (the tank is about 5 inches high). Hot melt glue into the crack seemed fine, l leak tested it, it was good, so refitted everything, filled the tank and left overnight. Did you know petrol dissolves hot melt glue??
Everything off again, and I purchased a plastic welding kit for $55,(remember the price of a new tank?). Used that (after purging the tank of fumes by a method taught to me by a really old mechanic a long time ago) and now all is good, and I still have the use of the plastic weld kit for future projects.

Number 3 is my own buzzbox, a Mitsubishi Express van I have fitted a fuel injected VT Holden V8 and 4 spd auto to. It has had a 308 Holden V8 in it that I fitted about 8 years ago. I thought it would be a quick changeover to the later V8 as they were same brand and type. Wrong.!!! The only thing that fitted was the engine mounts. The gearbox was 4" longer, necessitating shortening the tailshaft, and making a new mount. The wiring was a nightmare, these V8's were only fitted to the early VT's, and (so far) I have found 3 different wiring diagrams , (none of which match the engine loom fitted to mine), so it has been a slow process working through the (approximate) 70 wires to get it and it's electronically controlled auto to co-operate together. It's all up and running now, just a few more little jobs before the engineer will sign it off.

Number 4 is my bike. I have decided to fit a sidecar to it. I bought a sidecar about 5 years ago off a mate that was moving to Alice Springs, and had no room to take it with him. It's a Highway Premier 1 and a half sidecar. I bought it originally to go on a 750 Honda I have stashed out the back, it was going to be my rally bike. But with Julia having sold her bike, and her telling me mine is uncomfortable to pillion on, I have decided to fit the 'chair' to the Bolt. I have mocked them up together, just waiting for the attachment parts to arrive. Julia has been asking a few people about chair riding, and is suitably impressed, (she is a bit concerned I will make it 'quick release' to get rid of her.!!

Could you find a really hot powerful V8 to fit into a Smart car for me?
Top

Have a look at this Dean.
https://www.youtube.com/watch?v=AgwzHJo3IXM
Paul Butler #17758
Top

With the right parts, you could build that in about three days probably.
Top

Righto, me being me, I started at the last project while still working on the others.
I pulled the sidecar outta the container last weekend and pulled the fibreglass body off it. Then I set the Bolt up in the shed to the correct lean angle, (about 2 deg). I put the bare sidecar chassis beside it and slowly set everything up correctly. I put some straight steel tube beside the rear tyre to get a straight line to set the sidecar toe in. (About 3/4"). I set the chassis level with wood blocks and packing, this setting up took about an hour. Then I started on the lower mounts. After a lot of measuring, remeasuring, and checking, cutting and drilling mounting plates, then welding them to brackets that bolt to the sidecar chassis I had the lower mounts done. This sounds relatively easy, but took over ten hours. Pics to follow. Todays job is the upper mounts, then hopefully this arvo, a test ride to check alignment and then refit the body and wire it up. All sounds easy if you say it fast.
I'll keep you posted (with pics) later tonight.
Paul Butler #17758
Top

Sounds like you'd be the man to see when I get too decrepit to hold up a solo Gold Wing, Paul. 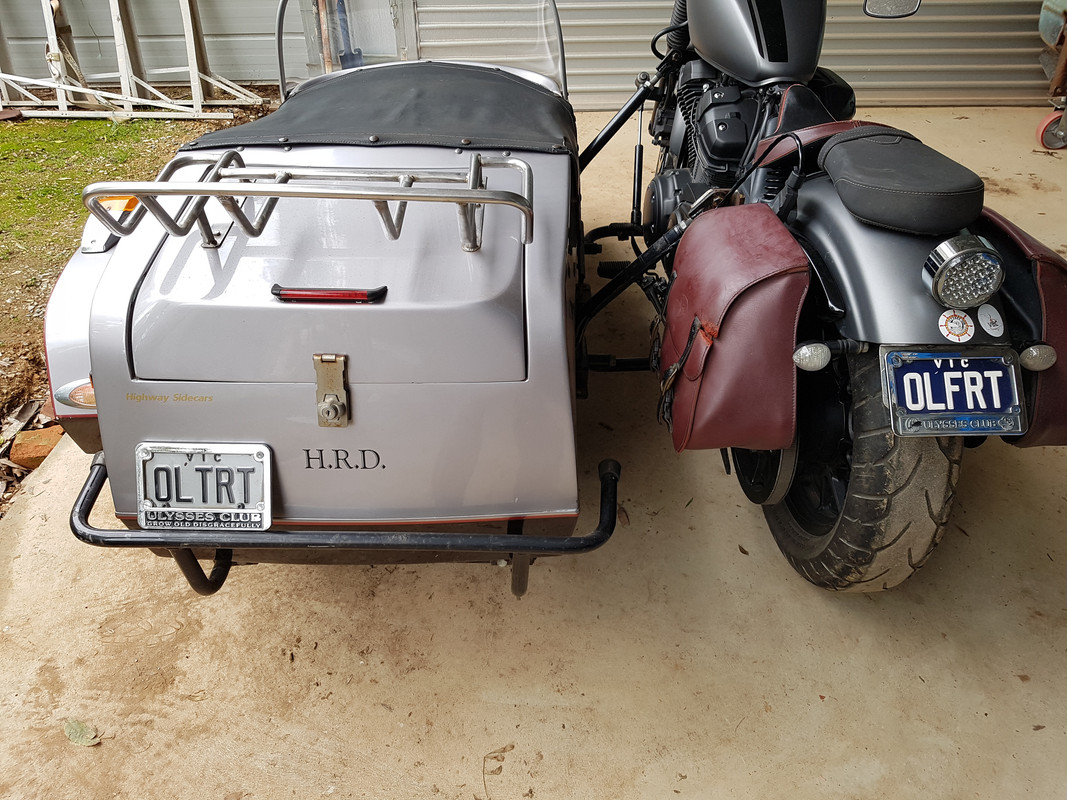 Righto, sidecar is finished, everything set right, wiring done, and road tested with and without a passenger. It travels down the road at 100 kph quite fine. Different cambered roads alter the 'pull' slightly, but not scarily.

I found out the mower is still under warranty, so have arranged for a new tank.

The van has given me a few problems, the ignition coil failed, and the new one I bought wouldn't fit in the orignal spot. It was 5mm too big. That necessitated more work than first thought. I made a new mount for it, fitted it all up and tried to put my custom inlet air pipe back on. Guess what, it didn't quite fit, so had to modify it a bit. It took about 5 hrs to get it all right.

The Bedford project is moving on slowly, I ended up making a few more alterations, (with the blessing of the engineer I'm using) and ended up shortening the chassis 5 ft, and moving the front crossmember forward another foot which simplifies some other areas that were a bit 'tight'. Just have to finish the welding of the chassis,and then start at the front again. It'll take a while.
Paul Butler #17758
Top

Crikey you have been busy. You put exhaust gas through the old tank to nullify the gas in it?? and now you go and get a new one? But?? how'd the welding go, aww I wanna know it worked.
Strewth that would have been a nice combo with the 750four.
Top

I'm impressed. Not only is Paul a pretty quick rider, but he's obviously good with his hands. Julia must be pleased.
No good for me. I look at it and see more stuff that has to be kept clean. Puts a lazy guy like me off.
Ken Wagnitz #21315
Top
Post Reply
17 posts